Dieter Söll honored for his mentorship of postdoctoral students 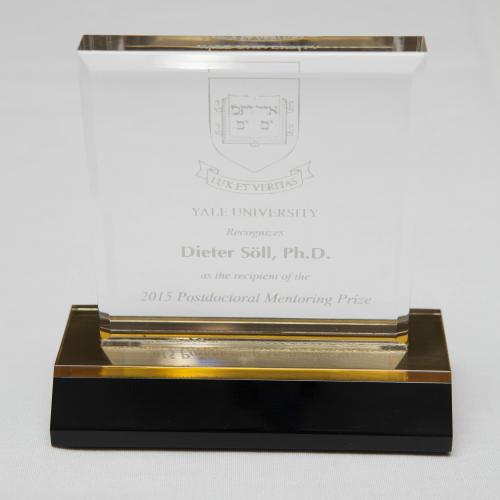 Yale chemist Dieter Söll was awarded the 2015 Postdoctoral Mentoring Prize during a ceremony at the Omni New Haven Hotel at Yale on Sept. 12 as part of Söllfest, a weekend series of events celebrating his 80th birthday. The prize recognizes a faculty member who is judged to best exemplify the role of a mentor to their postdoctoral trainees.

In a letter to Söll informing him of the award, Provost Benjamin Polak cited the success the faculty member’s mentees have had in a wide range of fields.

“The postdoctoral years are a crucial stage in the career trajectories of young scholars, and good mentoring can make the difference between success and failure,” Polak wrote. “You have distinguished yourself through your exemplary record of training postdocs who have met success and followed in your footsteps to become National Academy of Science members and become founders of biotech companies.”

Deputy Provost Richard Bribiescas, who presented Söll with the award, noted that, “Great scientists are quite common at Yale. However, those who dedicate themselves in a manner that Dieter has to mentoring are rare gems. To do so with so many graduate students and post-docs for over 48 years is exceptionally rare. Dieter is a ‘touchstone’ scholar who has devoted scientific, career, and life guidance to generations of scientists, with no signs of slowing down.”

Söll earned both his B.S. and Ph.D. at Stuttgart Technical University before joining the Yale faculty in 1967. During his 48 years at Yale, 61 graduate students earned their Ph.D. degree and over 160 postgraduate scholars have carried out research in his laboratory. In 1971, he created a Summer Research Program at Yale for 10 minority students from historically black colleges, becoming a model for other educational institutions.

Earlier in the day, President Peter Salovey addressed over 100 alumni and faculty members at a picnic and praised Söll for his contributions: “Not only has Dieter been on the cutting edge of scientific research and served as a fabulous mentor to grad students, he has also been a remarkable faculty member role model and is ahead of his time as a promoter of diversity.”

Currently a Sterling Professor of Molecular Biophysics and Biochemistry, Söll has served on the editorial boards of numerous scientific journals and has been a member of many federal advisory panels and committees responsible for the examination of issues related to genetic research. He has edited nine books and authored more than 460 articles, and spearheaded international efforts in the 1980s to adopt a common computer database and format for recording masses of genetic information.

At the ceremony, Graduate School Dean Lynn Cooley, a former mentee of Söll herself, toasted him with the following:

“If we measure our admiration and respect for Dieter by the distance everyone traveled to be here, we get some idea — Japan, Germany, Brazil, China, Switzerland, and many parts of the U.S.

If we measure Dieter by the accomplishments of students, post-docs and faculty who have worked with him these last 48 years, their remarkable achievements demonstrate Dieter’s impact on the world of science.

If we measure Dieter by the relationships built in his lab, I will say this: When talking with colleagues I worked with more than 30 years ago, it felt as if we had never left his lab.

And yet, we cannot take the full measure of Dieter because his work continues, and there is no end in sight!”